September started serendipitously when I was unexpectedly invited by fashion designers Vin + Omi, to their show at London Fashion Week. I'd previously read an article in The Guardian newspaper about how they were using nettles harvested from Prince Charles's Highgrove Estate in their latest collection, and after sharing it in the 'Nettles for Textiles' group I'm a member of on Facebook, was surprised to find Vin himself commenting.

I'd heard of Vin + Omi as my daughter recently moved to London to study Fashion Communication and Styling and had written an essay about their focus on sustainability. After some mutual following on Instagram where he explained that they'd also used natural dyes, we were invited to the show.

Then a nettle spinning workshop popped up in my friend Ginny's hometown (Ginny is a graduate of my online training and now a lovely friend too!) Like all wonderfully fated events, the workshop happened to be with a friend of her's, Brigitte Kaltenbacher - the co-founder of the afore-mentioned Facebook group. 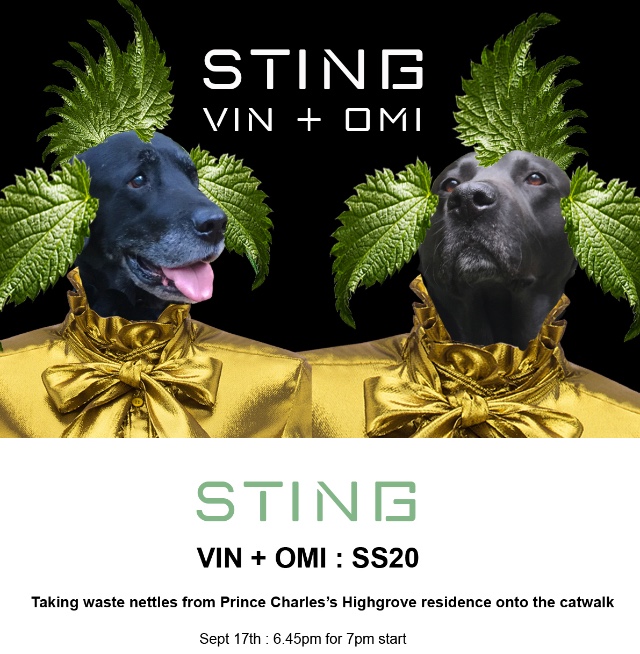 So, two weeks before the show, I got to experience first hand the process the designer's had gone through from foraging the plants, to making the clothing and it gave me a great insight into garments I might have otherwise not fully appreciated.

The nettle workshop started with a stroll through the lovely Surrey countryside, foraging for the plants that were to become yarns and threads. I love hand embroidery and am gradually getting back to being a textile artist, having spent the last three years teaching and working mainly on developing my online workshops in natural fabric dyeing. I was excited that I might go home with even a little embroidery thread to use in my work.

We were instructed to cover up while foraging yet I still managed to get stung, on my forehead! Crash helmet next time! Although I'm pretty sure my enlightenment must be that little bit nearer having had nettle medicine administered to my third eye ; )

Our first job was to strip the stems of stings using our trusty marigolds, then split them into four ribbons. The picture on the left shows my first nettle cordage! I’m a big fan of rope making and teach my online students how to make it from fabric scraps during my eco print workshop. I could make rope all day! It’s so satisfying and therapeutic. The repetitive action of twisting one piece then the other requires just enough concentration to keep you focussed so silencing the usual inner chatter.

In the second photo you can see the woody pith within the nettle stem. All that must be snapped out (it can be used for paper making) then once you have the bast (which if I remember rightly is a combination of the outer skin and the fibres), you can begin twisting into cordage.

While we worked, Brigitte told is about the fascinating heritage of nettles, which were once considered, according to her fellow nettle guru Alan Brown 'the fibre of the landless' in this country. Recent analysis has revealed that what was often collectively termed 'flax' during archaeological digs, was in fact nettle fibre and that during World War II, soldiers would be reprimanded for shaving their prickly collars which had been made from nettle fabric due to cloth rationing.

The silky fibres are within the phloem or outer layer just beneath the skin (or bark?) Brigitte showed us some nettle fibre that had been so carefully processed, it was like silky baby's hair. Mine, on the other hand, still had pieces of bark left in it. 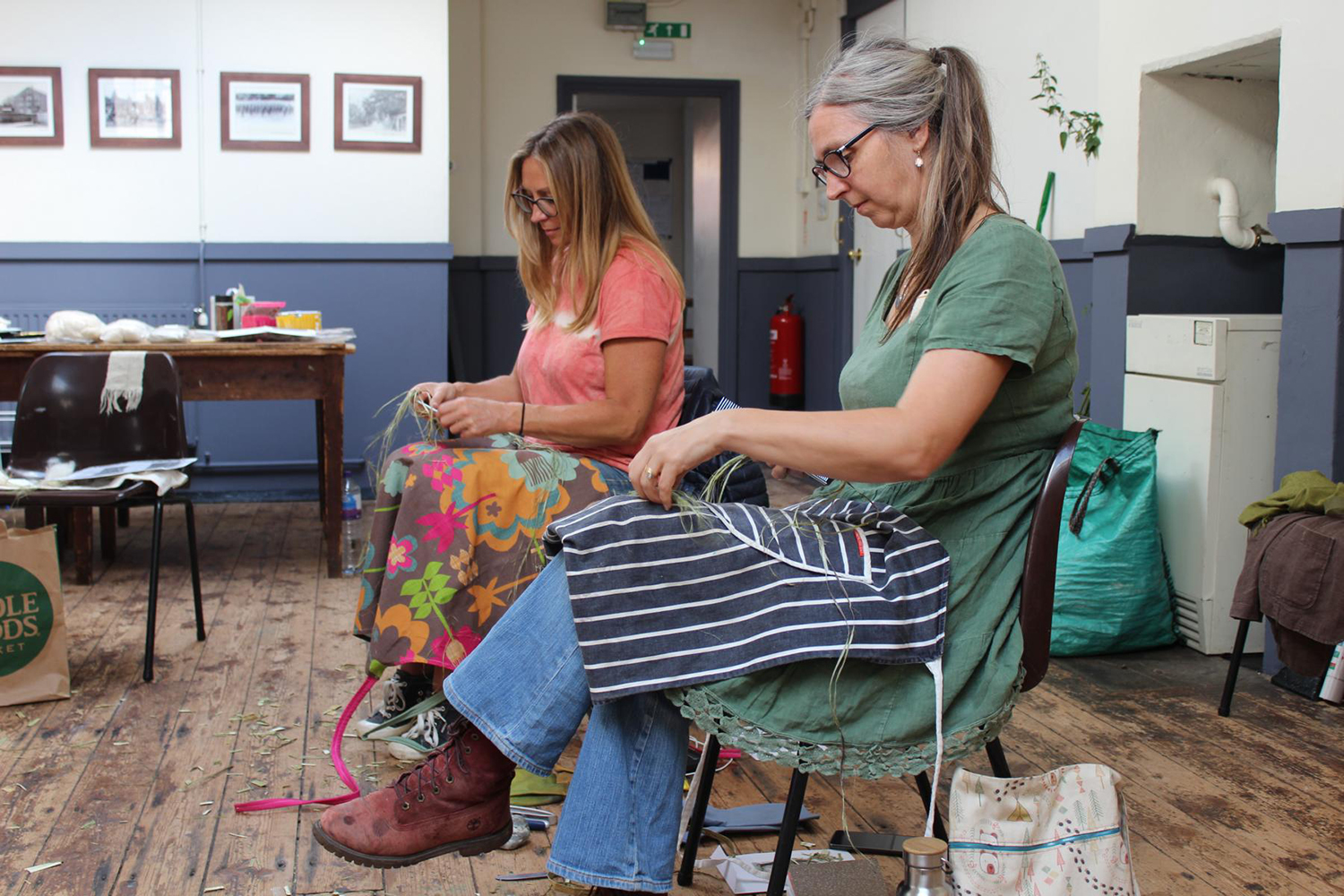 Ginny Farquhar, A.K.A. @myrtle_sweet and I finding ourselves lost in the process of combing out the silky fibres from nettles @beekay_makes workshop last Sunday. I think we both understand the paradox of losing yourself to find yourself. When practicing a rhythmic, repetitive craft requiring concentration, you lose your everyday chattering ‘monkey mind’ to find your undercurrent of peaceful contentment. Crafts often induce this healing state of mind. Concentration is meditation after all. 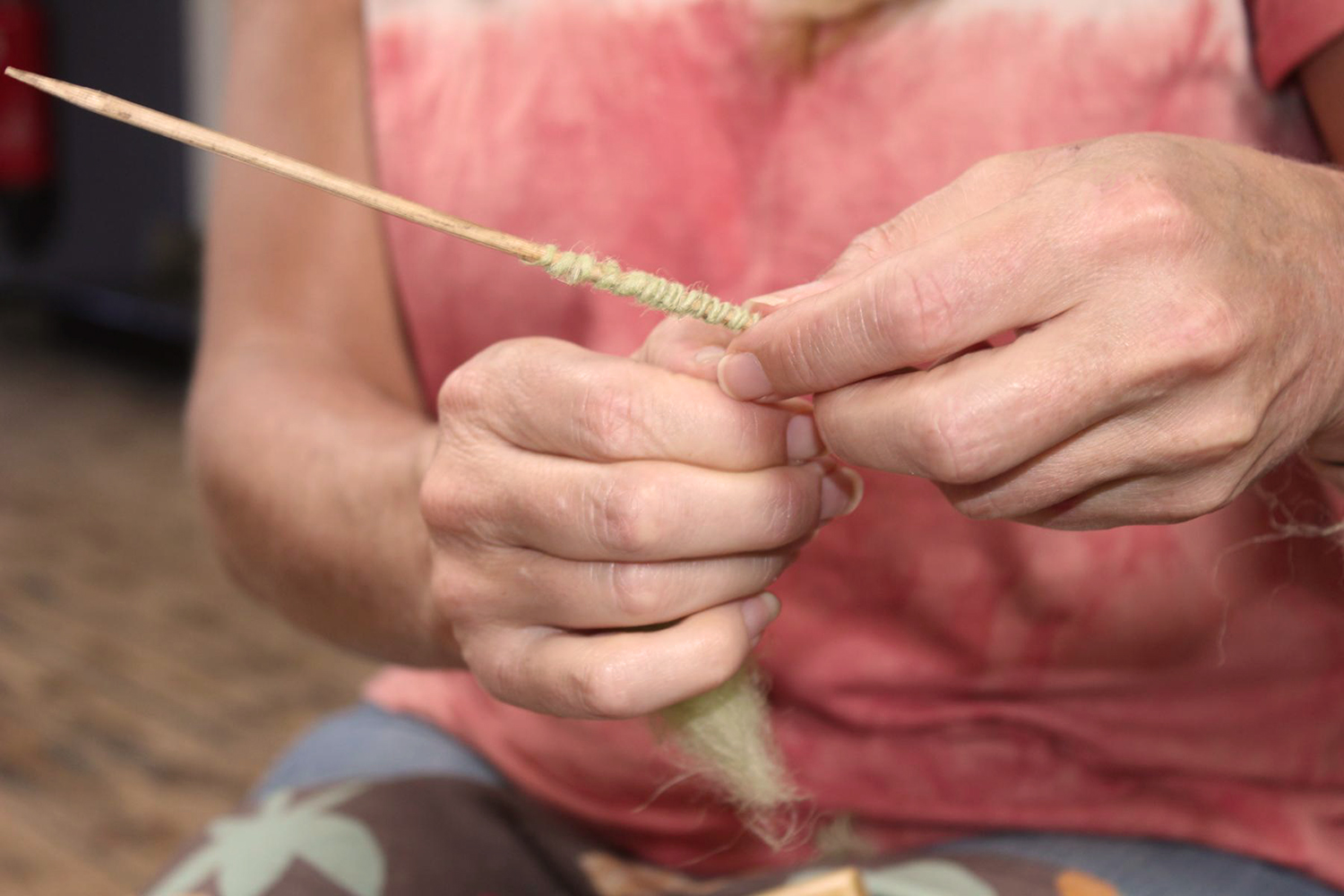 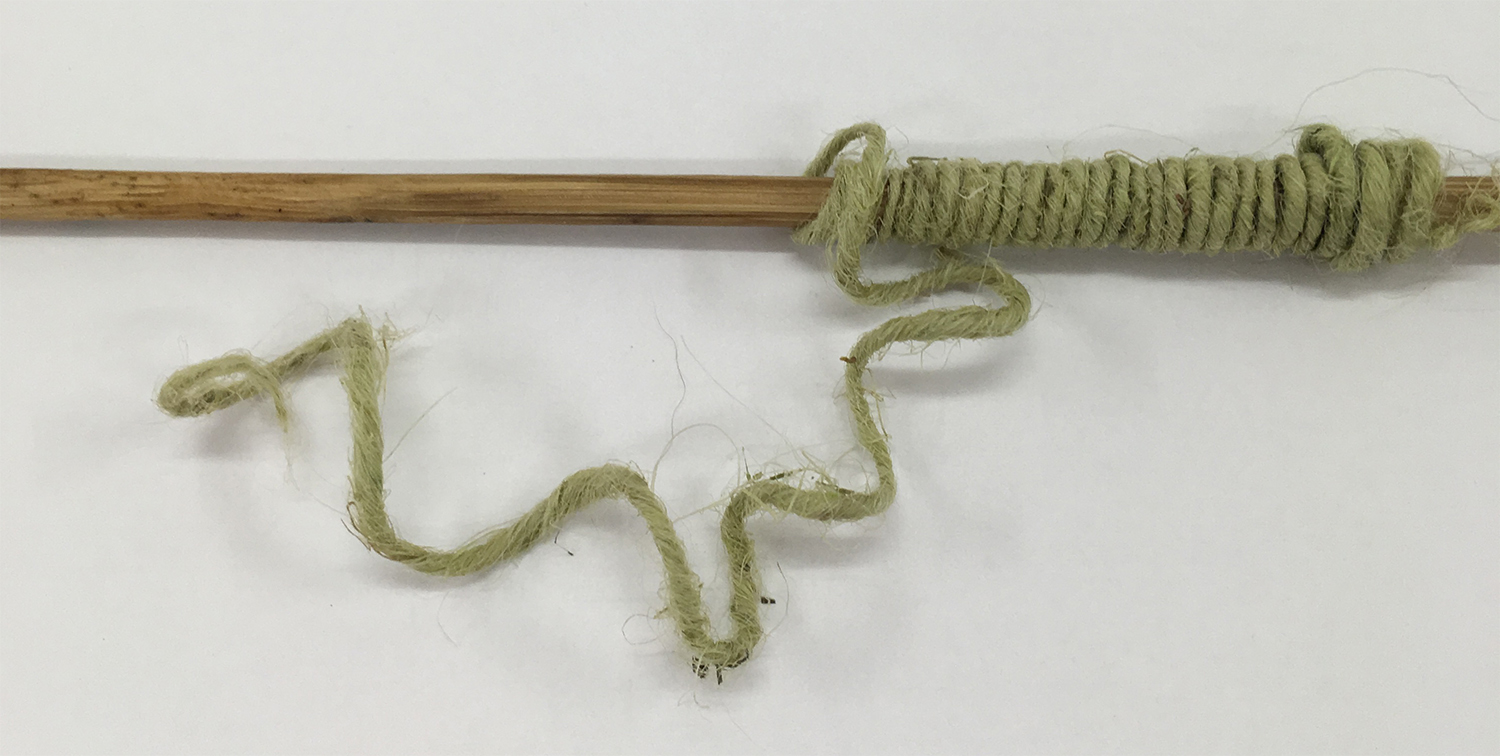 I may only have spun a few inches of embroidery thread but they mean so much! I’m not sure how often I’ll get chance to devote the time to spinning my own threads but it was certainly an inspiration and the small pieces I made are all the more precious for their slow process. Those threads are infused with enjoyment and the provenance of a special time and place.

Makes me wonder if we haven’t lost the simple pleasure of living in our quest for faster and faster technology. Can you imagine the pace of life that allowed people to take so much time processing nettles? We miss so much depth when we rush, what have we really gained by speeding up our lives so much? 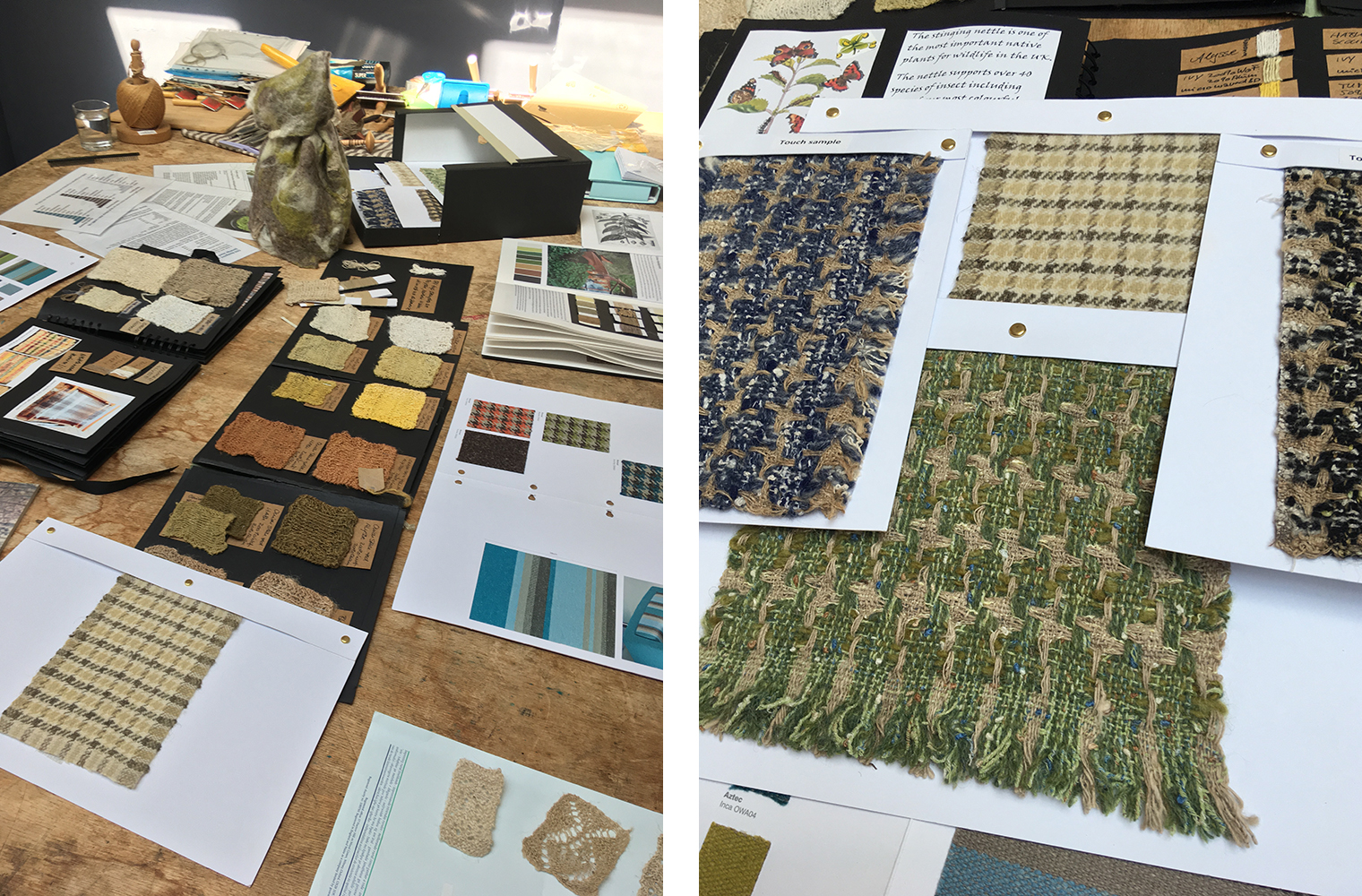 These are some of Brigitte's lovely hand woven nettle samples. She uses natural dyes too. When you think about it, it would be sacrilege to take all that time and energy extracting fibres from nettles to them dye them with petrochemicals, don’t you think? Lovely to find other like-minded people creating with nature. 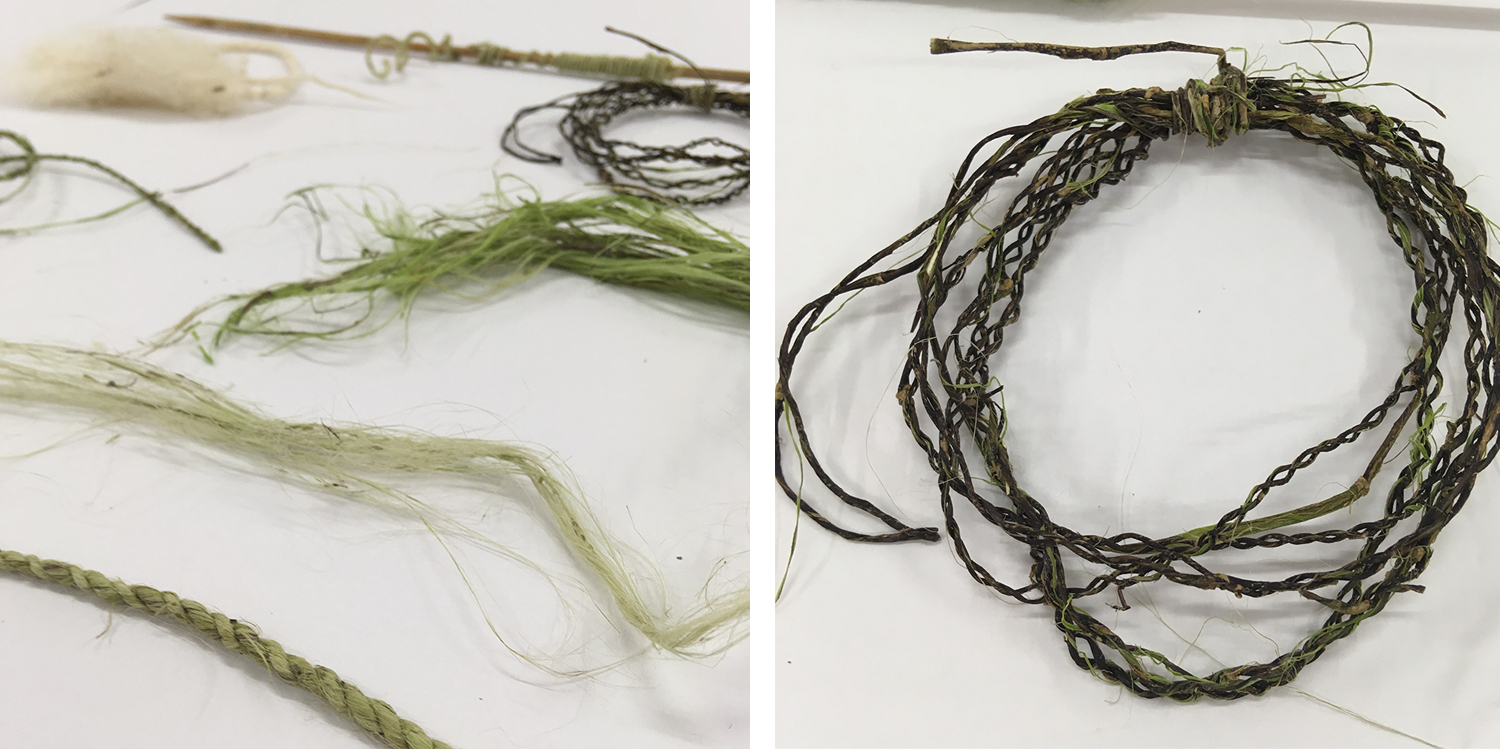 Here’s what I made. It’s incredible to me that I started out with a few nettle stems foraged from a nearby farm, then a few hours later went home with pieces of rope and embroidery thread. The images show the nettle fibres in various stages of processing and spinning. The green samples are British nettles and the white, Himalayan nettles which are used to make ramie fabric.

Just a week after the nettle spinning workshop, my daughter Ella and I were at the Savoy Hotel in London attending the Vin + Omi show. Having been a fashion student in the 90s and working backstage at Vivienne Westwood, Red or Dead and Helen Storey (remember her?) it was funny to be back in that world. There were young students, dressed to attract maximum attention, parading up and down the Strand while we queued to get in - exactly like I would have! I wore some truly terrible clothes back then that usually fell apart mid-wear due to my slap-dash sewing! 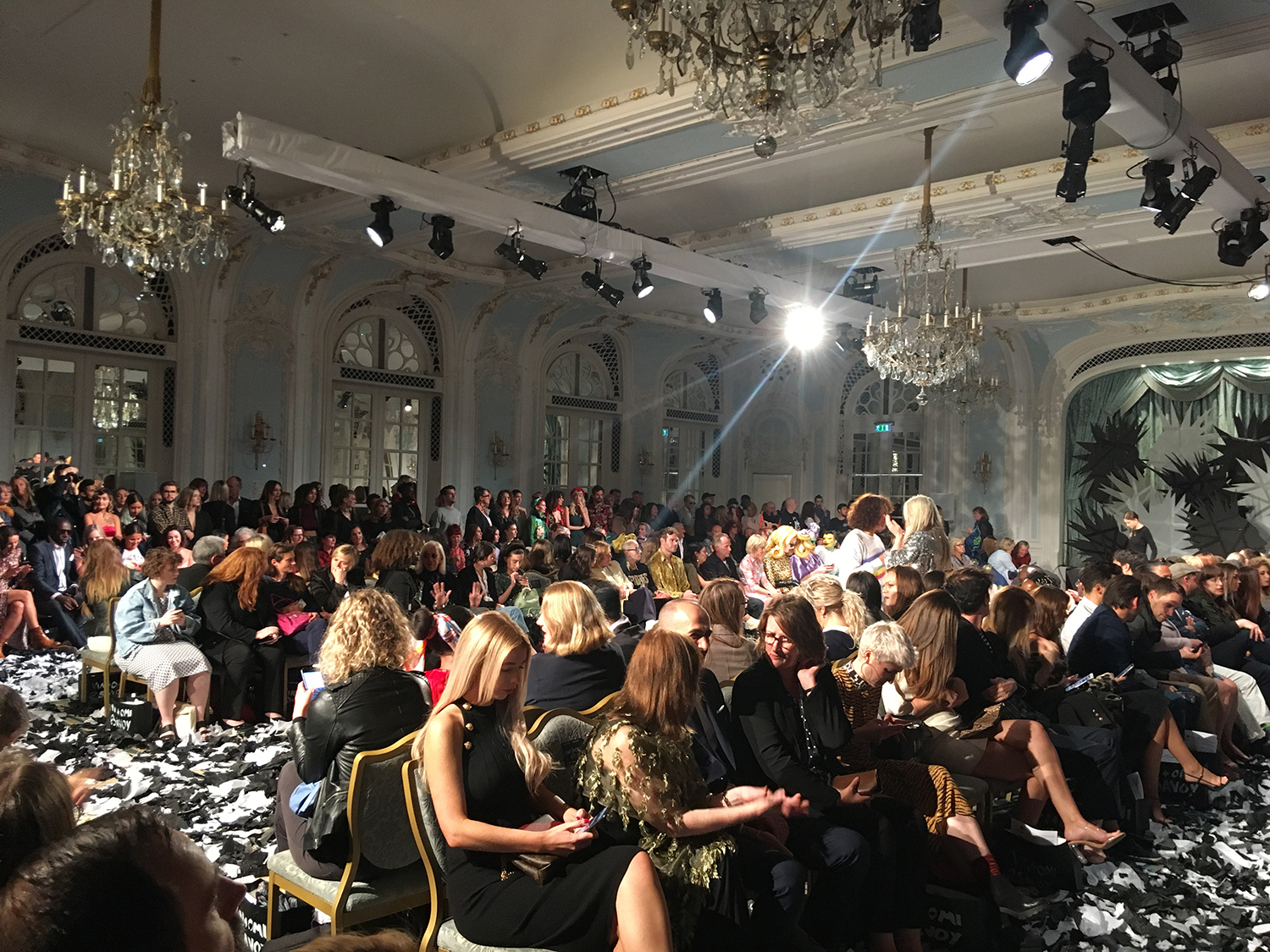 Vin + Omi are opposed to fast fashion and describe themselves as "world leaders in contemporary eco fashion. Our message is education, innovation and to push the boundaries of what we can do to save the planet while making fashion fun, environmentally and socially responsible."

It's so encouraging to see ethical principals and environmental concerns becoming fashionable. At last, the process might just become more interesting (which it always has been) than the end product and feeling good might begin to take priority over just looking good at any cost. 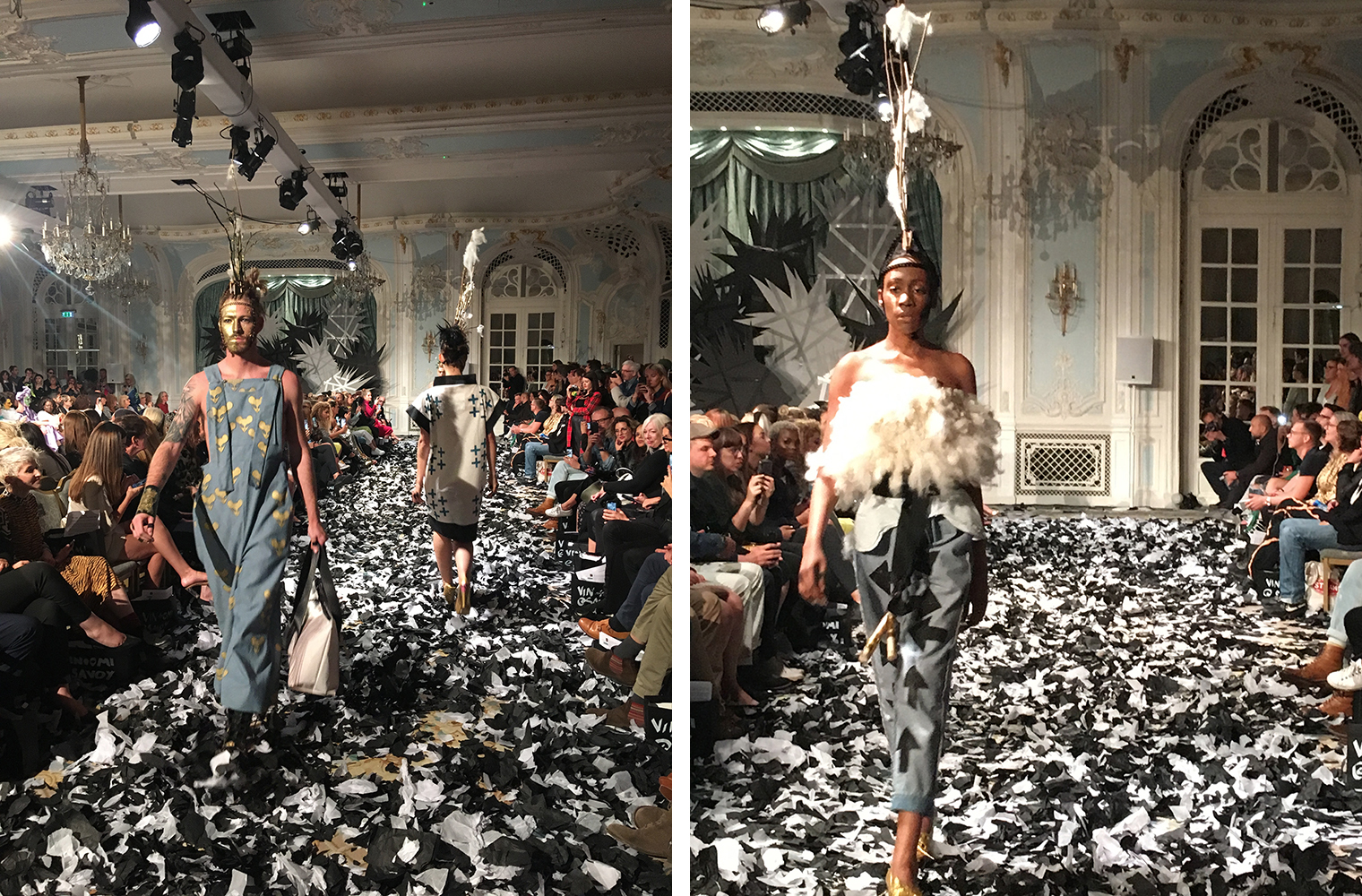 It was great to see madder red (below) and woad blue (above) along with the appliquéd strap line, 'don't fuck the planet'.

The designers had followed the traditional process of foraging, rhetting (rotting on grass) but had then apparently developed new ways of extracting the fine fibres from the woody stems that has little environmental impact.

It will be interesting to see if their influence trickles down to the High Street and whether nettles really could be a viable crop for use in locally manufactured textiles. They certainly made a positive statement which further convinced me of what I already believe, that the restoration of the planet can be an inspiring and beautiful process. 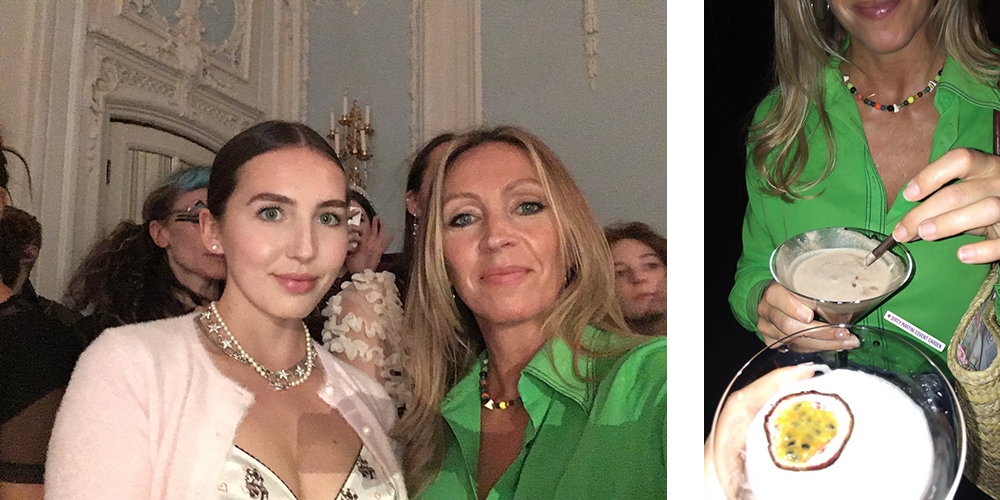 Following the show and after party, it was time for a Dirty Martini with my daughter. It was so good to catch up! Somehow, she thinks that I was a student during the most iconic period of London fashion; the mid-90s supermodel era, but honestly, I think this is the most exciting time!

If you're interested in dyeing your clothes in plant colours, you can join my online workshops right now and start rewilding your wardrobe! 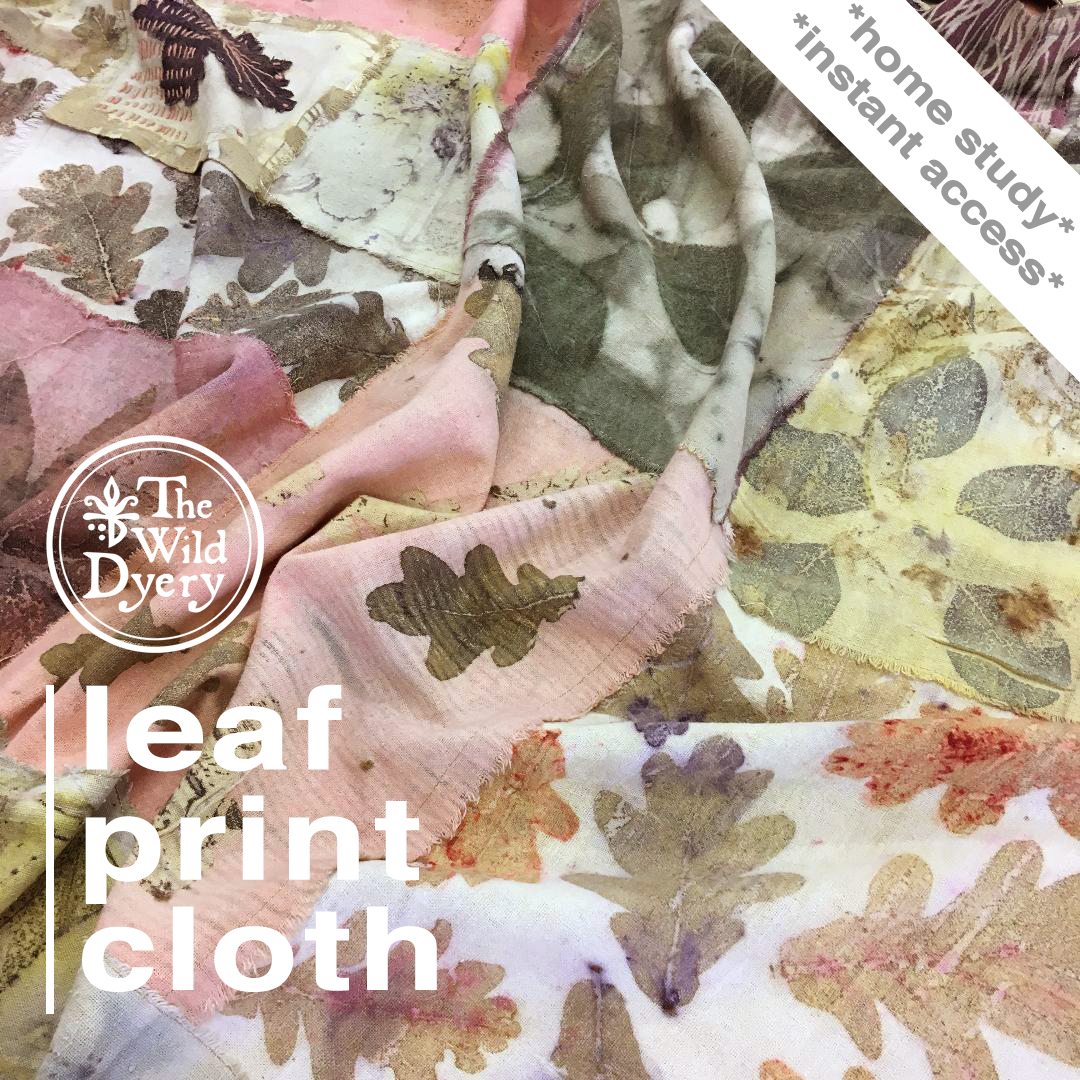 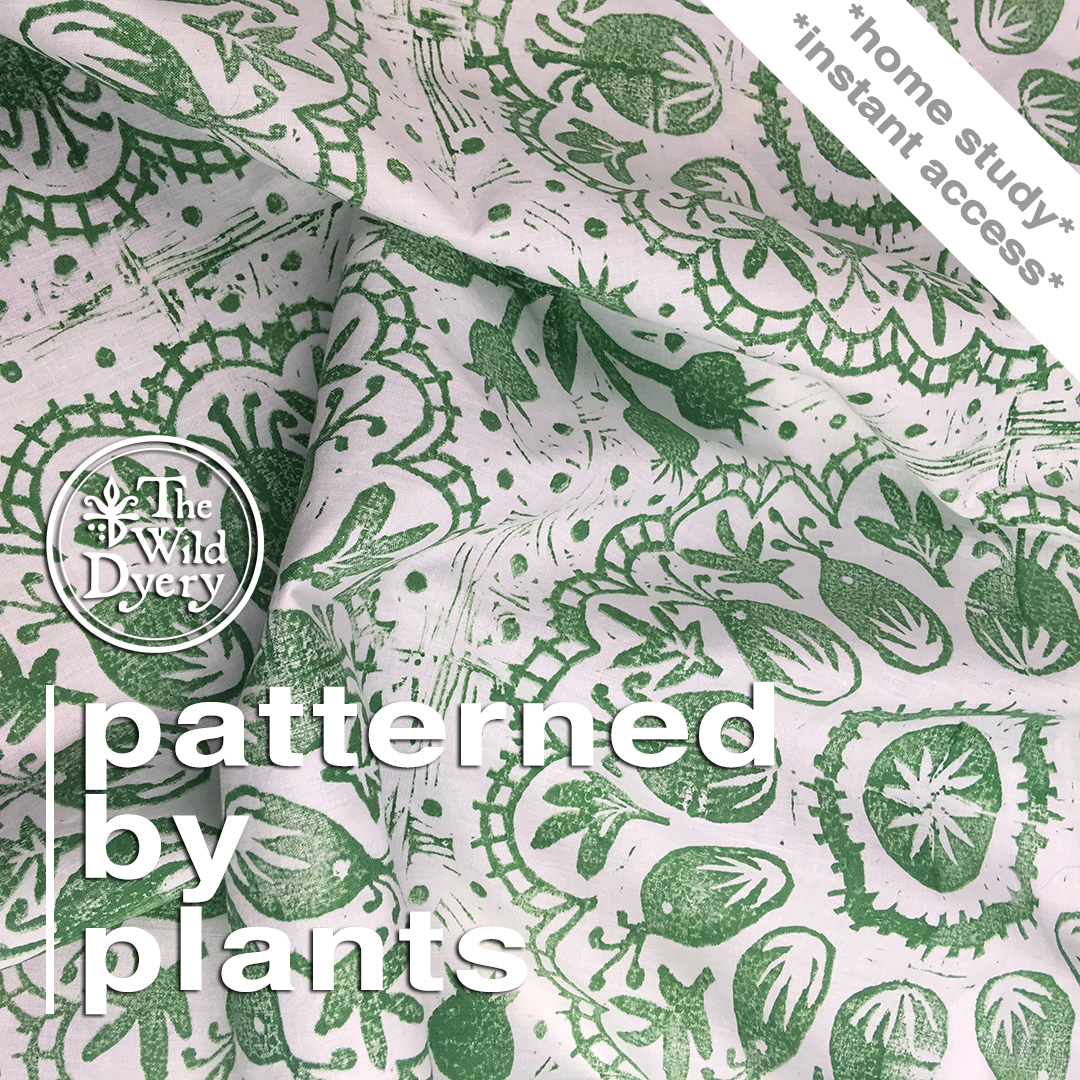 If you'd like to work through all three modules consecutively but prefer home-studying at the same time as a group of international students next February, June and October, you can join the semi-live training with daily tutor support and get a discount in the process! There's also a payment plan available if you book during the Early-Bird period... find out more... 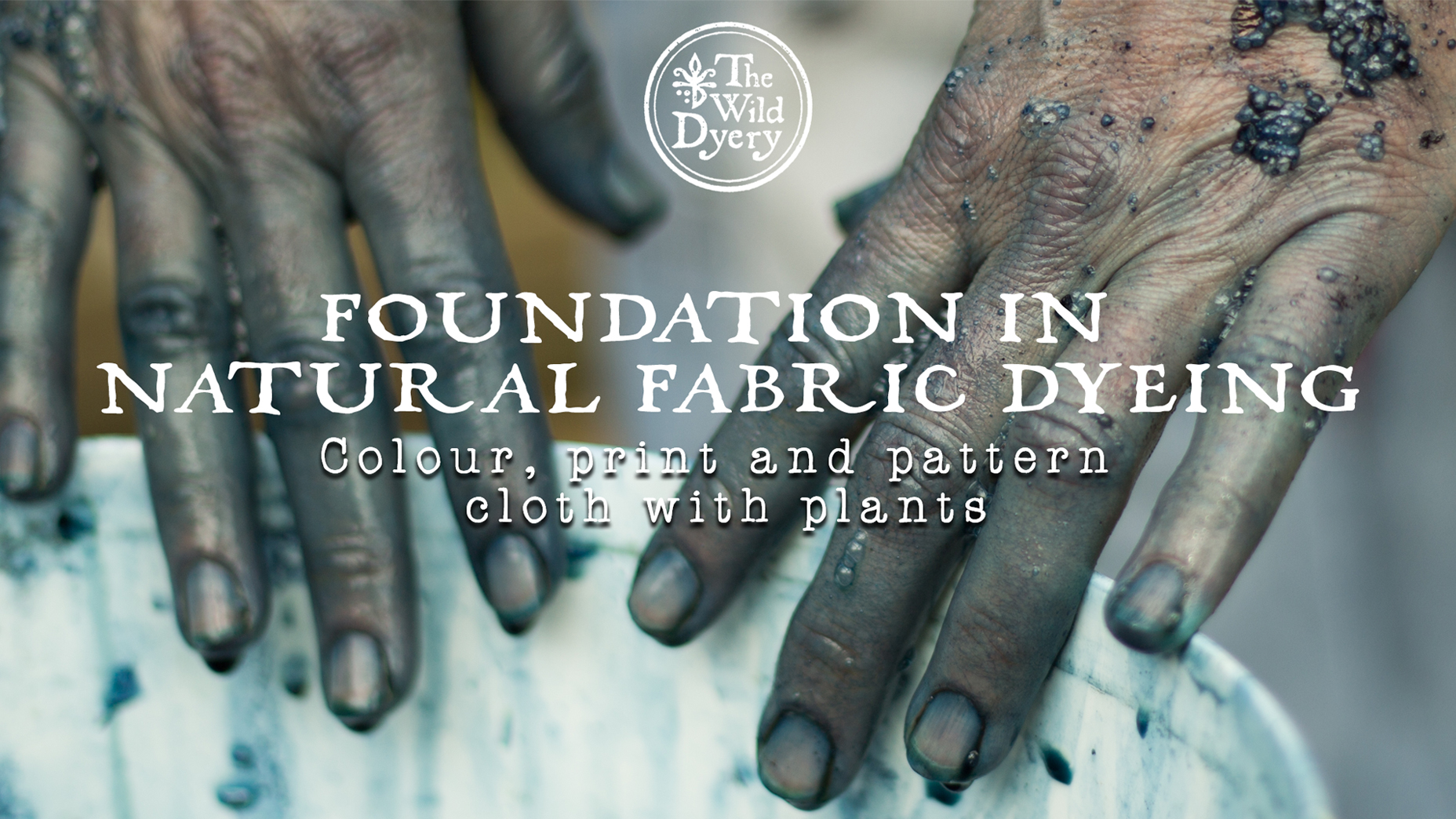 We are gratefully giving a percentage of profits from these workshops back to the earth via the wonderful 'women seeding change'...